Buffalo of the Salish and Kootenai by Chalk Courchane

Mythological Creatures Among Us-- The White Bison by Kevin Engle

American Buffalo compiled by Stephenie Flora--The American Bison was commonly referred to as Buffalo by the early pioneers.  The bison inhabited the Great Plains of the United States and Canada in massive herds, ranging from Canada's far north to Mexico in the South, and from eastern Oregon almost to the Atlantic Ocean.  The Plains Bison was the smaller of the two species in North America.  It was noted for its rounded hump, while the Wood Bison was larger with a taller square hump.

coat.  They can reach up to 6 1/2 feet tall and 10 feet long and weigh between 900-2,000 pounds.  Their heads and forequarters are massive, and both sexes have short, curved horns, which they use in fighting for status within the herd and for defense.  The cows have a single calf each spring and nurse it for a year.  A Bison matures at three years of age and can live up to 18-22 years in the wild and 35-40 years in captivity.  They can jump up to 6 feet high and run up to 40 mph.

A rare condition sometimes results in a calf turning entirely white.  It is not to be confused with albino, since white bison still possess pigment in the skin, hair and eyes.  White bison are considered sacred by many Native Americans. 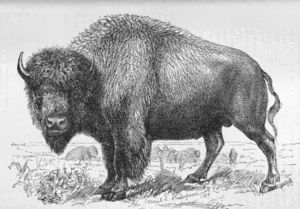 Due to its size and the protection afforded by living in a herd, the bison have few enemies.  Sometimes the weak and the young are taken by grizzly bear and wolf packs but the primary loss of buffalo were due to human contact.  The buffalo was the primary means of survival for the plains Indians.  In early times, prior to the use of horses, bison were herded into large chutes made of rocks and willow branches and then stampeded over cliffs.  These bison jumps are found in several places in the U.S. and Canada.  The large quantities of meat obtained this way provided a surplus that was then traded to other cultures.  Later, when Plains Indians obtained horses, it was found that a good horseman could easily lance or shoot enough bison to keep his tribe and family fed, as long as a herd was nearby.  The bison provided meat, leather, sinew for bows, grease, dried dung for fires, and even the hooves could be boiled for glue.  When times were bad, bison were consumed down to the last bit of marrow.

In the 1800s the bison were hunted almost to extinction.  The U.S. Government promoted wholesale extermination of the buffalo for a variety of reasons, the main one being control over the native population.  With their lives dependent on the bison to survive, the Native Americans would be forced to leave or starve.   The bison, as was the beaver, became a victim of commercial hunting.  Bison hides became popular in Europe and were also used widely in the west.  Sometimes they were hunted by organized groups consisting of one or two professional hunters backed by a team of skinners, gun cleaners, blacksmiths, teamsters, cooks, wranglers, etc.  Many of these professional hunters such as Buffalo Bill Cody killed over a hundred animals at a single stand.  One professional hunter killed over 20,000 in his career by his own count.  As the great herds began to wane, proposals to protect the bison were discussed.  Cody, among others spoke in favor of protecting the bison as he saw their numbers decline.  These efforts were discouraged because it was recognized that the Plains Indians, often at war with the U.S. depended on bison for their way of life.  To destroy one was to destroy the other.

In 1843, explorer John Charles Fremont made the following comment: "The extraordinary abundance of the buffalo on the east side of the Rocky Mountains, and their extraordinary diminution, will be made clearly evident from the the following statement: At any time between the years 1824 and 1836 a traveler might start from any given point, south or north, in the Rocky Mountain range, journeying by the most direct route to the Missouri River; and during the whole distance his road would be always among large bands of buffalo, which would never be out of his view until he arrived almost within sight of the abodes of civilization.  At this time (1843) the buffalo occupy but a very limited space, principally along the eastern base of the Rocky Mountains, sometimes extending at their southern extremity to a considerable distance into the plains between the Platte and Arkansas Rivers, and along the eastern frontier of New Mexico as far south as Texas."  The reason for the demise of the bison can be summed up in a statement made by Mr. Sanford, a partner in the American Fur Company, who stated: "The total amount of robes annually traded by ourselves and others will not be found to differ much from the following statement: American Fur Company 70,000; Hudson's Bay Company 10,000; all other companies 10,000 for a total of 90,000 as an average annual return for the last eight or ten years."

Since the skins of the buffalo are only good for dressing four months of the year (November until March), those killed in the remaining eight months were of no value to traders.  Probably not more than one-third of the skins taken from the animals killed, even during the good season, was ever traded due to the amount of labor needed to prepare them.  It was during the summer months and in the early autumn that the greatest number of buffalo were killed, and yet at this time a skin was never taken for the purpose of trade.  Based on the number of robes traded annually (as noted above) one can get an idea of the extreme number of buffalo killed each year.  As the pioneers began their westward migration, there were notations in the diaries and journals referencing encounters with the remaining herds of buffalo.  Buffalo stampedes left a lasting impression on many a pioneer.  Wagons were damaged and cattle and horses lost until later years when the food source of the bison was destroyed by the passing emigrations, leaving them to move farther from the trail.