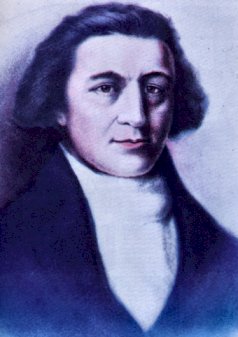 Captain Robert Gray, a Yankee trader, was born in Rhode Island in 1755. In his early twenties he served in the navy during the Revolutionary War, probably aboard a privateer. After the war he continued his career at sea.

In 1787 he and Capt. John Kendrick were commissioned by Boston merchants to sail up the Northwest coast to trade for furs and exchange the furs for goods from China. These merchants procured and made ready for sea a ship, the Columbia, and a little sloop, the Lady Washington. The vessels were stocked with trinkets to trade with the natives for furs. The voyage was to be a long one, around the Horn to the Pacific and then on to China to trade the cargo of furs for a cargo of tea and silk and then home to Boston.

By 1789 the ships were anchored in Nootka Sound. Capt. John Kendrick was at the helm of the Columbia and Capt. Robert Gray was in charge of the Lady Washington. Kendrick and Gray spent two seasons gathering furs on the coast. While in the Pacific they exchanged ships. Kendrick remained on the coast to continue trade. Gray, in the meantime, took the furs to Canton and returned to Boston with a cargo of tea. The furs had not sold well but Gray was welcomed home. Capt. Gray had become the first American to circumnavigate the globe.

The Columbia was overhauled and made ready for sea again. On September 28, 1790 Gray sailed from Boston on another expedition to the Northwest coast. After wintering over, Gray's ship arrived at Clayoquot, the American trading post on Vancouver Island, on June 5,1791.

That summer the American adventurers did not fare well. Gray sailed as far north as Portland channel where some of his men were murdered by hostile Indians. Meanwhile, Kendrick of the Lady Washington also met with tragedy. The natives of Queen Charlotte Island attacked Kendrick's ship and his men on shore. His son was among those slain.

The two ships returned to Clayoquot in September and Kendrick set out for China with furs. Gray erected a fort at Clayoquot and constructed a little sloop, named the Adventure, which he put under the command of Haswell, his second officer.

The Indians about Clayoquot were not friendly, and during the winter Gray and his men were obliged to keep constant guard to avoid an attack. On April 2, 1792 both vessels left Clayoquot, the Adventurer turned north for trade and the Columbia dropping southward. Perhaps Gray was only bent on finding new trading fields, for sea otter were still plentiful to the south of Vancouver Island. Yet his movements suggest that he was exploring for the River of the West. He sailed south along the coast to trade with the Indian tribes.

After reaching southern Oregon, he turned around and sailed north, seeking a safe and sheltered anchorage for his ship "the Columbia". He sighted what appeared to be a river, but the heavy seas made it impossible for him to enter.

On April 29, 1792 Gray sighted a vessel and hove to for an exchange of greetings with Capt. George Vancouver, a British Naval officer commanding the ship Discovery. Gray informed Vancouver that he had recently lain for nine days off the mouth of a large river where the reflux was so violent he dared not attempt to enter. Despite the information given him by the American, Vancouver believed that he could not have passed any "safe navigable opening". Gray's news impressed him but little. He noted in his journal: "If any river should be found, it must be a very intricate one and inaccessible to vessels of our burden." He pushed on northward. Gray continued on his way north, trading along the way.  At the same time he was looking for a safe harbor in which to lay over.  On May 7th his log book notes his discovery of what became known as Gray's Harbor:

"Being within six miles of the land, saw an entrance in the same, which had a very good appearance of a harbor...We soon saw from our masthead a passage in between the sand-bars. At half past three, bore away, and ran in north-east by east, having from four to eight fathoms, sandy bottom; and as we drew in nearer between the bars, had from ten to thirteen fathoms, having a very strong tide of ebb to stem....At five P.M. came to in five fathoms water, sandy bottom, in a safe harbor, well sheltered from the sea by long sand-bars and spits.

After spending a short time in the harbor, Gray decided to sail south to try again to enter the mouth of the river he had sighted.  This time luck was with him.  Gray ordered a pinnace, a light sailboat, launched.  As the small sailboat located a safe channel across the treacherous bar, the Columbia followed her into the fresh waters of the great river.  According to the ship's log, the entrance was sighted on May 11, 1792, at 4 a.m.  He describes the historic event this way:

"At eight a.m. being a little to windward of the entrance of the Harbor, bore away, and run in east-north-east between the breakers, having from five to seven fathoms of water. When we were over the bar, we found this to be a large river of fresh water, up which we steered. At one p.m. came to with the small bower, in ten fathoms, black and white sand. The entrance between the bars bore west-south-west distant ten miles; the north side of the river a half mile distant from the ship; the south side of the same two and a half miles distance; a village on the north side of the river west by north, distant three-quarters of a mile. Vast numbers of natives came alongside; people employed in pumping the salt water out of our watercasks, in order to fill with fresh, while the ship floated in. So ends."

Gray had found the great River and yet he described it laconically in one brief matter-of-fact paragraph and "So Ends!"  It is almost as if he considered the discovery of this river, which he named the Columbia after his ship, unimportant. He named the cape to the south, Adams, and the one to the north, Hancock (more commonly referred to as Cape Disappointment).

Capt. Gray went on to sell his furs in China in 1793. The results must have not met expectations because he was not sent out again. Kendrick of the Lady Washington was killed in Hawaii by a gun explosion. Gray's discovery apparently impressed the public little more than it had impressed Gray himself, for it was not followed up in any way for some years. Neither recognition nor wealth befell him. He died in poverty in 1806 at Charleston.

My name is Stephenie Flora. Thanks for stopping by.   Return to [ Home Page ] All [ Comments and Inquiries ] are welcome.