Indians have lived in the Pacific Northwest for thousands of years. They were inhabitants of the region before the first white man ever set foot in the area. Generally, they had dark skin, dark hair, dark eyes and broad faces with high cheekbones.

The hair of most Indians is straight or slightly wavy. Most Indian men have sparse facial hair. They used to shave simply by pulling out the whiskers as they appeared.

The fold of skin which gives Chinese, Japanese, and other Mongolian peoples the appearance of slanting eyes is present in varying degrees among certain tribes of Indians.

While Indians have dark skin, the color ranges from a yellowish brown to a dark reddish brown. They do not have red skin. The term "redskin" may have come from a variety of sources. One of the explanations comes from the fact that many Indians painted their bodies with a mixture of vermilion and grease. White men who traded with Indians quickly learned that vermilion, a bright red pigment, was one of the most valuable trade items. 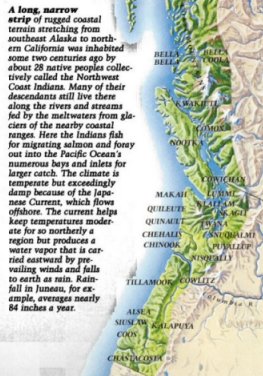 The indians living on the Pacific Coast were described at length in the Lewis and Clark journals:

"The Killamucks (Tillamooks), Clatsops, Chinnooks (Chinooks), and Cathlamahs, the four neighbouring nations with whom we have had most intercourse, preserve a general resemblance in person, dress, and manners. They are commonly of a diminutive stature, badly shaped, and their appearance by no means prepossessing. They have broad thick flat feet, thick ankles, and crooked legs: the last of which deformities is to be ascribed, in part, to the universal practice of squatting, or sitting on the calves of their legs and heels, and also to the tight bandages of beads and strings worn round the ankles, by the women, which prevent the circulation of blood, and render the legs, of the females, particularly, ill shaped and swollen. The complexion is the usual copper coloured brown of the North American tribes, though the complexion is rather lighter than that of the Indians of the Missouri, and the frontier of the United States: the mouth is wide and the lips thick; the nose of a moderate size, fleshy, wide at the extremities, with large nostrils, and generally low between the eyes, though there are rare instances of high aquiline noses; the eyes are generally black, though we occasionally see them of a dark yellowish brown, with a black pupil. But the most distinguishing part of their physiognomy, is the peculiar flatness and width of their forehead, a peculiarity which they owe to one of these customs by which nature is sacrificed to fantastic ideas of beauty. The custom, indeed of flattening the head by artificial pressure during infancy, prevails among all the nations we have seen west of the Rocky mountains......Soon after the birth of her child, the mother, anxious to procure for her infant the recommendation of a broad forehead, places it in the compressing machine, where it is kept for ten or twelve months; though the females remain longer than the boys. The operation is so gradual, that it is not attended with pain; but the impression is deep and permanent. The heads of the children, when they are released from the bandage, are not more than two inches thick above the upper edge of the forehead, and still thinner above: nor with all its efforts can nature ever restore its shape; the heads of grown persons being often in a straight line from the nose to the top of the forehead."

The inland Indians were taller than their coastal counterparts and, for the most part, did not participate in the flattening of the head. In many cases their features tended to be finer than the coastal tribes and they were often noted as being "handsome" and of "fine stature". The inland tribes included the following groups: 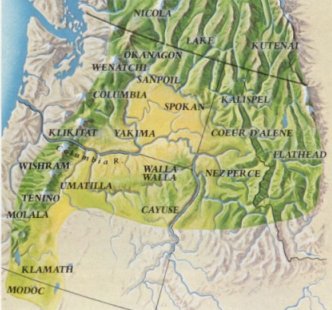 The Plateau Indians, occupying the region that includes part of British Columbia, Montana, Idaho, Washington, and north-central and northeastern Oregon, and sometimes the Klamath Lake basin.

The Indians of the Western Interior that included the interior valleys of western Oregon from the Willamette Valley south into the Upper Umpqua basin.

The Indians of the Great Basin that were found living around Malheur lake in southeastern Oregon.

My name is Stephenie Flora. Return to [ Home Page ] All [ Comments and Inquiries ] are welcome.