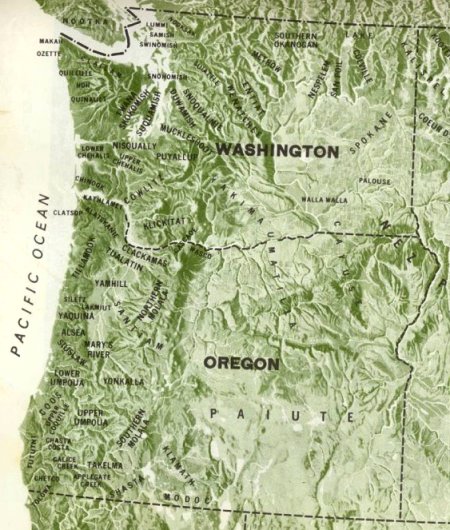 The term most often heard when describing groups of indians is "tribe". However, it is important to note that the tribes are part of a larger grouping known today as Confederated Tribes . Within the tribes it was broken down into individual "bands" and within the bands it was divided into family groups.

Over the years the information published on the various tribes has spawned so many inaccuracies that it is difficult today to understand their true nature.  Some of the best sources on the subject are the websites of the tribes themselves.

COASTAL TRIBES:
The Chinook occupied what is now Pacific County in Washington.  They were well known as traders, and plied up and down the Washington coast in their mighty ocean going canoes.  Their connection to what is now Oregon was through the Clatsop.  The Clatsop and the Lower Chinook, Cathlamet, Wahliakum and Willapa have been a distinct group for at least two generations prior to the signing of the 1851 Tansey Point Treaty.  At that time each group sought to secure separate treaties and to be listed as Chinook Tribes in order to stay on their anestral lands and not be grouped together on one big Reservation.  Each tribe negotiated the treaty with the following result:
*The Willapa are situated North in today's Pacific County, WA  and include the islands and land on the East and South shores of Willapa Bay
* The Wahkiakum are situated in today's Wahkiakum County, WA from Rosburg to Cathlamet and 50 miles North
* The Cathlamet are situated in today's Wahkiakum County, WA from Cathlamet West to Cowlitz County, WA
* The Lower Chinook are situated in today's Pacific County at the Columbia River from the ocean North up Long Beach Peninsula, WA and East to Wahkiakum Co, WA
* The Clatsop are situated in Clatsop County, OR from the Columbia River South to Tillamook Bay, East to the Willamette River, OR

The Nehalem and Tillamook-Siletz whose land stretches from Seaside, OR South to Cape Foul Weather, OR speak a Salish language called Tillamook. A small group of Clatsop dropped from the Chinook roles in 2003 and enrolled with the Nehalem creating a new designation that they are refering to as Clatsop-Nehalem.  This has created political tension between the two groups that have yet to be resolved.

In recent years, an archeaological dig conducted by Portland State University and Dr. Kenneth Ames in Wapato Valley has unearthed an early plank house occupied by the Chinookan peoples between 1400AD and 1830AD.  More on this discovery can be read at The Meier Virtual Site.

The Chinook referred to the land east of what is now Pacific County as "the place of the enemy."  In those days, relations between the Chinook and Cowlitz were not friendly.  The territory from the Cascade Range to the Pacific Ocean was controlled by the Cascade tribe, whose Chief Tumulth greeted Lewis & Clark before the explorers met the Chinook.  The Cascades no longer exist as a distinct tribe, but were absorbed into other tribes, including the Grand Ronde.  But the bulk of the Cascades were absorbed into the Cowlitz, as the ties with them were strong

The modern day name, "Chinook",  was derived from a Chehalis word.  It first was used by explorers who were told by Chehalis guides that there was a Chinook village on Baker Bay in what is now Pacific County, Washington.  The term was soon used to describe all coastal tribes in the area.  (This tendency to lump the tribes together ignores the individual heritage of the various tribes and perpetuates a misunderstanding of their history.)

The coastal regions seem to have been well populated in early times. In 1792 the early explorers spread small pox to the natives,  In 1805, while living among the tribes, Lewis and Clark estimated the total number at somewhat more than 16,000. In 1829, however, there occurred another epidemic, which, in a single summer, destroyed four-fifths of the entire native population. Whole villages disappeared, and others were so reduced that they were, in some cases, absorbed into other villages.  It can be assumed that it was the result of contact with a "white man's" disease for which they had no immunity.  The epidemic was most disastrous below the Cascades. In 1846 Hale estimated the number below the Cascades at 500, and between the Cascades and The Dalles at 800.

Most of the original coastal bands had no special tribal names, being designated simply as "those living at (place name)" This fact, especially after the epidemic of 1829, made it impossible to identify all the tribes and villages mentioned by early writers.

The Chinook language served as the basis for the Chinook Jargon which became the principal means of communication for the Indians from California to the Yukon, as well as trappers, traders and the majority of other individuals living and surviving in the territory.

The "Flatheads" were self-designated as Se'lic or "People".  The Salish speaking nation probably originated in British Columbia.  Over time they moved into western Montana, then into north central Idaho.  Around 1700 they acquired horses and assumed a great deal of the culture of the Plains Indians.  Ongoing wars with the Blackfeet and several smallpox epidemics reduced their numbers significantly in the 18th century.

THE PLATEAU TRIBES:
The Shahaptian speaking tribes occupied what is now SW Idaho, SE Washington, and NE Oregon. The earlier territory of these tribes extended from the Rocky mountains to the Cascade range, and from the Yakima river basin to the Blue Mountains of Oregon. This territory was overstepped at various times, patricularly by the Klikitat in the W., who crossed the Cascades and occupied the headwaters of the Cowlitz, Lewis and White Salmon rivers, and even pushed temporarily as far S. as the Willamette valley after the epidemic of 1829 decimated the population in that area. Along the Columbia river theirvillages extended nearly to The Dalles, where they were checked by the Chinook, who had pushed to that point from the coast. To the E. occasional hunting parties crossed the Rockies, but no permanent settlements were formed.

The Paiute or Shoshone were the most nomadic nation in Oregon. They pushed north into Oregon and Idaho from Nevada and dominated the greater part of eastern Oregon. They were hard-working, moral and warlike. They were the principal enemy of not only many of the major tribes but also of the US Calvary. The wars between the Calvary and the Paiutes lasted over twenty years in the Oregon outback and Idaho.


The Kalappian nation all located on the Willamette River except the Yoncalla. These tribes were constantly at war with the coastal peoples. In the 1820's the Kalapooians were severly reduced by disease. The losses to disease attracted the attention of the Mollalas and Klicitats, who launched an invasion against the Kalapooians and conquered all of their territory above the Umpqua valley. The Kalapooians rallied and drove the invaders out, but were forced onto reservations in the 1850's. Soon they were nearly extinct. These tribes included the Ahantchuyuk, Atfalati, Calapooya, Chelamela, Chepenafa, Luckiamute, Molalla, Santiam, Yamel, Yoncalla


The Takilman nation was located along the Rogue River. The men of these tribes painted their faces and were zealous in acquiring wealth and wives. Tribe membership was small. They were decimated by white man's diseases and war.  The tribes of this nation included the Takelma

The Latagawa Tribe lived in the upper Rogue Valley of Southern Oregon.
"Latgawa means: "those living in the uplands". They are located in the Rogue Valley of Southern Oregon. The Latgawa  tribe is the only surviving Indian Tribe having the full rights to the Rogue Valley Indians Treaties of 1853 and 1854.
In the era of the Rogue Indian Wars, Rogue Valley Indians were killed or captured, while many of the Latgawa escaped  and survived with the help of Tribes such as the Klamath, Blackfoot, Nes Perce, Chief Seattle and the Suquamish tribe, and others. Wandering as far away as Colorado, up into Canada, and returning to our aboriginal lands in Southern Oregon and Northern California. They continue to grow as more native indians return home and others are accepted into the Tribe.
The Latgawa Tribe, is existing today and existed long before the white man came to the Rogue Valley. The Latgawa Tribe, was never captured or terminated, and has full juristiction of our  people, our lands and in our relationship with the Federal Government as a "Domestic Sovereign" Indian Nation, we are recognized as a nation within a nation through the Rogue Valley Indians Treaties of 1853 and 1854 and other Binding Agreements, Laws, and Executive Orders."

The Lutuamian nation, which included the Lalacas, ruled south-central Oregon and northern California. By tradition, the chief of the Lalacas could demand warriors from lesser tribes. But one chief demanded fish as well. A lesser tribe refused, its own chief saying that they were willing to send their young men but not their fish. A revolt followed, and, despite the odds, the small tribe won its independence, putting an end to the Lalaca empire. After this, the majority of the tribe were called the Klamaths and the newly independent was called the Modocs. Both Klamaths and Modocs simply called themselves Maklaks, meaning "people". The tribes of this nation included the Klamath, Klicitat, and Modoc.