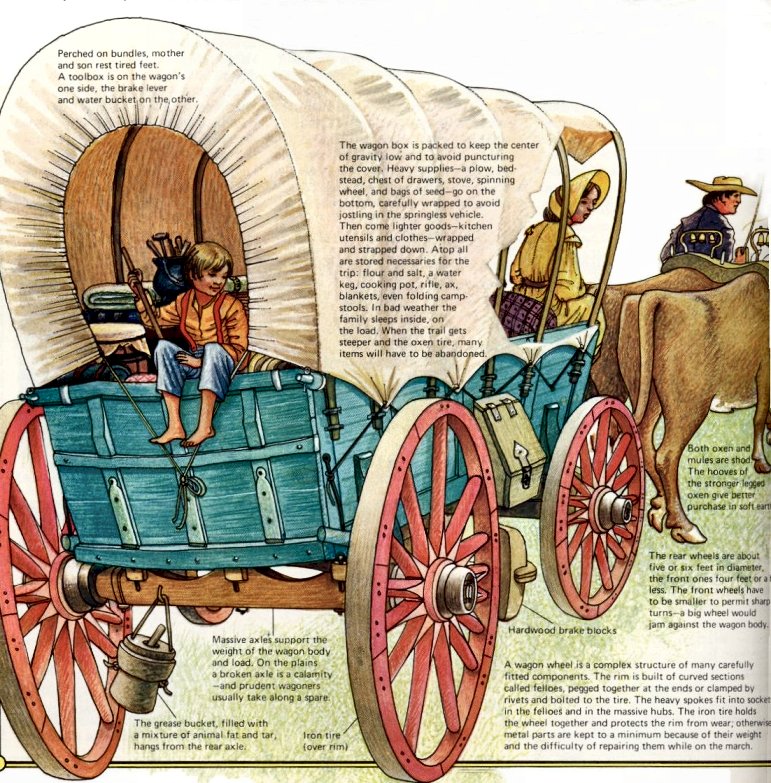 The covered wagon used to cross the plains to the west was a smaller, lighter version of the big Conestoga wagon used in the east.  The cloth top that protected people and possessions from extreme weather conditions also was the prime reason that the wagon was sometimes referred to as the "prairie schooner".  (The view of a wagon train with its billowing tops resembled a fleet of ships sailing over the plains.)  A frame of hickory bows held the wagon top.  The top could be rolled back for ventilation.  Waterproofed with paint or linseed oil, the top was of heavy duty canvas, often made from hemp.

Big wheels helped the wagon roll easily over bumps and dips in the trail, and wide rims helped keep the wagon from sinking into soft ground. The rear wheels were about five or six feet in diameter, the front ones four feet or a bit less.  The front wheels had to be smaller to permit sharp turns--a big wheel would jam agains the wagon body.

The wagon's 10 X 3.5 foot body could take a load of a ton and a half, but most advised to keep the weight below this limit.  The lighter the wagon, the less likely it was to bog down in muddy streambanks or prairie sloughs--or to tire the long-suffering teams pulling it. Massive axles supported the weight of the wagon body and load.  On the plains a broken axle was a disaster--and prudent wagoners usually took along a spare.

A toolbox is on the wagon's one side, the brake lever and water bucket on the other.  Hanging from the rear axle was the grease bucket, filled with a mixture of animal fat and tar.  It was used to keep the hubs of the wheels greased.

Two lariats will be needed for every horse and mule, as one generally wears out before reaching the end of a long journey.  They will be found useful in crossing deep streams, and in letting wagons down steep hills and mountains; also in repairing broken wagons.  Lariats made of hemp are the best.

One of the most indespendable articles to the outfit of the prairie traveler was rawhide and an awl.  The rawhide was used for repairing harness, saddles, bridles, and numerous other daily necessities. 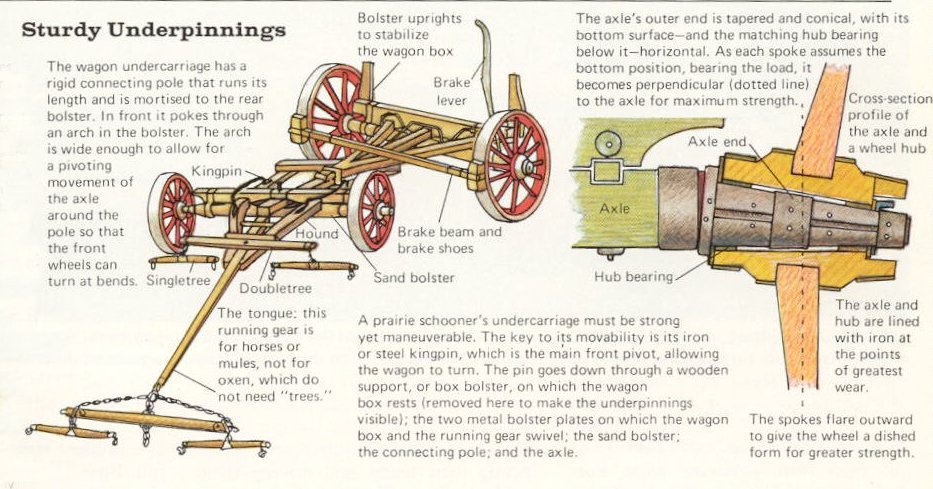 The wagon box was packed to keep the center of gravity low and to avoid puncturing the cover.  Heavy supplies--a plow, bedstead, chest of drawers, stove, spinning wheel and bags of seed--go on the bottom, carefully wrapped to avoid jostling in the springless vehicle.  Then come lighter goods--kitchen utensils and clothes--wrapped and strapped down.  On top are stored necessaries for the trip: flour and salt, a water keg, cooking pot, rifle, ax, blankets, even folding campstools.

By the time the necessities were packed and the prized possessions were loaded there was little room remaining.  In decent weather most people cooked, ate, and slept outside. In bad weather the family slept in tents, under the wagon or inside, on the load.  As the trip got harder and the teams started to tire, many items would be abandoned alongside the trail.