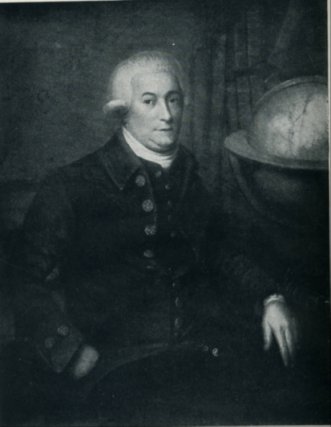 
In 1790 Capt. Vancouver was chosen to represent England at the Nootka Conference. During his voyage to the conference he was instructed to make an extensive exploration of the Pacific Coast. In particular he was to keep a careful lookout for any river or passage the might connect the Pacific and Atlantic Oceans.

With the hopes of a Northwest Passage fading, discussion had turned to the possibilities of a series of connecting rivers, with perhaps a short portage, that would allow the transport of goods and people across the continent.

In April 1791 Vancouver sailed from Falmouth, England.  His expedition was well-outfitted and equipped with the finest scientific instruments available. His crew, totalling approximately 150 men, were handpicked. His flagship, the Discovery, was a sloop of war of some 340 tons, named after the ship on which Vancouver had accompanied Cook on his last voyage of exploration. Lt. William Broughton commanded the "Chatham", the second ship in Vancouvers expedition. Sailing to join the expedition later was the supply ship, "Daedalus".

The route to be taken was the one previously followed by Cook--the Cape of Good Hope, Australia, New Zealand, Tahiti and onto Hawaii  where they would winter. In March 1792, the ships left their winter harbor at Hawaiian Islands. A month later they arrived off the coast of California at 35 degrees north latitude. As the expedition sailed north from Cape Mendacino to Cape Flattery, Vancouver checked latitudes and noted previously unrecorded features of the coastline--but he missed the Columbia River!

There are many stories about Vancouver's voyage and an equal number of theories regarding his failure to discover the Columbia. Some suggest that his principal interest was in the Strait of Juan de Fuca, which he thought might be the Pacific entrance to the Northwest Passage. Others say that he had made up his mind that no such river existed and stubbornly refused to investigate evidence to the contrary. On April 27, Vancouver wrote in his journal:

"The sea has now changed from it's natural, to river coloured water, the probable consequence of some streams falling into the bay, or into the ocean to the north of it, through the low land......Not considering this opening worthy of more attention, I continued our pursuit to the Northwest, being desirous to embrace the advantages of the prevailing breeze..."

"April 1792, At four o'clock, a sail was discovered to the westward standing in shore. This was a great novelty, not having seen any vessel but our consort (The Chatham), during the last eight months. She soon hoisted the American colours, and fired a gun to leeward. At six we spoke her. She proved to be the ship Columbia, commanded by Mr. Robert Gray, belonging to Boston, whence she had been absent nine months. Having little doubt of his being the same person who had formerly commanded the sloop Washington, I desired he would bring to, and sent Mr. Puget (Lt. Peter Puget) and Mr. Menzies (Archibald Menzies, botanist) on board to acquire such information as might be servicable to our future operations."

The men returned and reported to Vancouver that Gray claimed to have discovered a river to the south which he had sighted but had been unable to enter. Vancouver recognized from the description and from the latitude that Gray referred to the opening which Vancouver had observed two days before. He wrote in his journal:

"...thoroughly convinced as were also most persons on board, that we could not possibly have passed any safe navigable opening, harbor or place of security for shipping on the coast from Cape Mendacino to Classet....."

"If any river should be found, it must be a very intricate one and inaccessible to vessels of our burden".

He then pushed on northward, where he discovered and explored Puget Sound, naming it after one of his lieutenants, Peter Puget. He saw and named Mount Baker in honor of another of his lieutenants who first spotted its white crown of beauty. He explored the mainland of British Columbia, and, circumnavigated the island that now bears his name. Many of the landmarks he named remain familiar today, Port Discovery, Mount Rainier, Port Orchard, Whidby Island, Vashon Island, Hood Canal etc. To make his discoveries official and thus bolster Englands claim to the area he formally took possession of the entire region June 4, 1792 near the present site of Everett, Washington. He named the region New Georgia after George III, King of England.

He then swung down to Nootka where the Spanish Commissioner, Capt. Juan de la Bodega y Quadra, awaited him to negotiate the conflicting claims on the Pacific Coast. They seemed to enjoy each others company and spent much time wining and dining each other in a lavish manner. But, when all was said and done, no agreement was reached. They parted on the best of terms with Quadra headed south to the Spanish possessions in California.

After Gray's discovery of the river he had returned to Nootka where he had left a chart showing the location of the river with Quadra. Vancouver, seeing the chart, headed south immediately after the conference to check out Grays claim that he had discovered a naviagable river.

After arriving at the mouth of the river, Captain Vancouver sent his second-in-command, Lt. Broughton to investigate. Broughton sailded several miles up the river and continued in a small boat about 100 miles upstream. Then, having somehow convinced himself that Gray had not actually entered the river, Lt. Broughton went ashore and formally claimed the river, its watershed and the adjacent coast in the name of His Majesty, King George III of England.

On return to England, with failing health, Vancouver soon retired to Petersham, on the outskirts of London where he prepared his journal for publication.  The lengthy publication was within 100 pages of completion when Vancouver died on May 12, 1798 at the age of 40.  He was buried in the churchyard of St. Peter's, Petersham, England.

It was almost two decades before conflict between the British, Spanish, Russians and Americans over the Pacific Coast came to a head. Russia, England and Spain lay claim to the area based on discovery, exploration and settlement. All had settlements on the Pacific Coast. They were just a few scattered fur trading posts, but they were enough to use in support of their claims. America laid claim based on discovery and exploration. Up to this point they did not have settlements in the area.

It was at this point that President Jefferson tried to gain support for an exploratory expedition to the Pacific Coast.
See Lewis and Clark Expedition

An in-depth look at the voyage and life of Vancouver: Madness, Betrayal and the Lash: The Epic Voyage of Captain George Vancouver by Stephen R. Bown; published in hardcover May 2008 by Douglas & McIntyre.

My name is Stephenie Flora. Return to [ Home Page ] All [ Comments and Inquiries ] are welcome.