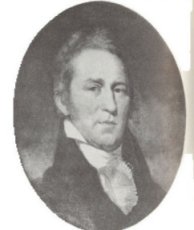 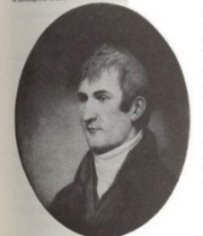 By the end of the eighteenth century the United States was starting to expand in a westward direction. In 1803, the United States took a giant step westward when she bought, from France, a vast area of land west of the Mississippi. This was the Louisiana Purchase, which moved the westward boundary of the country approximately to the present eastern border of the state of Idaho.

President Jefferson, long interested in the territory that lay beyond the Mississippi River, selected his personal secretary, Meriwether Lewis (1774-1809), to head up an expedition. Lewis chose his friend William Clark (1770-1838) to share the leadership with him. Both Lewis and Clark were relatively young for such an important assignment. Clark was twenty-nine and Lewis was thirty-three when the party left St. Louis on May 14, 1804.

The first two months of the journey it rained often. One day would be hot and humid, and the next cold and windy. Sudden rain squalls would turn the Missiouri into a furious, roaring river that tossed their boats against riverbanks and onto sand bars. To add to the misery, they were constantly under attack by snakes, ticks, and mosquitos. Despite it all, they had arrived near the present site of Omaha, Nebraska by the end of July.

Near the end of October the expedition reached the land of the Mandans, and prepared to winter over near the present city of Mandan, North Dakota. Here they built a few rooms for living and a couple of large store-rooms, all enclosed by an 18-foot stockade. The winter of 1804-1805 was spent preparing gear and equipment for the spring departure.

One of the most fortunate events of the winter was the employment of the French-Canadian interpreter Toussaint Charbonneau and his wife, Sacagawea [see additional notes below]. Historians question Charbonneau's contributions to the expedition but his wife, Sacagawea, not only served as an advertisement to the peaceful intentions of the party, but also helped guide the party to her native Shoshone country, counseled Lewis and Clark on the ways of the Indians, cared for the sick, and taught the men how to survive in hostile country.

The first part of June, the expedition reached a point at which the Missouri seemed to divide. Unsure of which of the two channels was that of the Missouri, Captain Clark and five men, including his Negro aide York, followed the stream to the left, while Captain Lewis and six men explored the channel to the right. After going a few miles upstream, Clark decided that the stream to the left was undoubtedly the Missouri.

In the middle of August, near the southwestern tip of Montana, the first Indians with horses were sighted. Upon reaching the Indians camp, Sacagawea discovered that the head chief was her brother Cameahwait. The party bought nine horses and a mule and secured a guide to lead them through the Lemhi Pass into the territory of the Flathead or Salish Indians. When they arrived in the Flathead territory, Lewis bought an additional 29 horses.

By August 25, 1805, Lewis wrote that water was freezing at night. They could see snowstorms in the mountains. Their food was gone and there was no game in the area. They killed and ate one of the horses. The hungry and ragged band, with Sacagawea and her baby, fought their way through blizzards. They finally crossed Lolo Pass, at the present Montana-Idaho border where they met a village of friendly Nez Perce Indians. An old Indian chief mapped their route for them.

On October 16 they reached the junction of the Snake and the Columbia, slightly southwest of present day Richland, Washington. Six days later they arrived at Celilo Falls. It was November before the party was safely beyond Celilo Falls. Rain and fog settled down on the expedition as it paddled and floated down the Columbia River. Finally they reached the mouth of the Columbia and made camp on Baker's Bay on the north shore, just inside Cape Disappointment. They stood on a piece of high ground and saw the Pacific Ocean for the first time.

Due to the lateness of their arrival it was decided to winter over on the Pacific Coast. The Indians recommended that the winter camp be built on the south shore of the Columbia. A suitable site was found and log cabins were erected. They named the camp Fort Clatsop in honor of the friendly Indians in this region south of the Columbia River.

At what is now Seaside, Oregon the men built a stone fireplace in order to make salt. They filled huge kettles with salt water, placed them on the fireplace, and boiled the water until it all evaporated. The dry salt remained at the bottom of the kettles. By this method they made enough salt to last them through the winter at Fort Clatsop, and 3 gallons remained for the homeward journey.

The winter of 1805-1806 at Fort Clatsop was a busy one. New clothes were made, arms and weapons were repaired, and the journals and records were brought up to date. On March 23, 1806, the men packed the canoes and the expedition started back up the Columbia, over the mountains, toward home. The return journey was fast and uneventful in comparison with the trip westward. On August 12, the expedition, which had split earlier for exploration, reunited. At Fort Mandan, Sacajawea, Charbonneau, and their young son Baptiste, who had been nicknamed Pomp, left the party.

On September 23, 1806, the Lewis and Clark expedition returned to St. Louis. The Lewis and Clark Expedition was one of the most important overland journeys of exploration in history. Only one man was lost and he died from an illness shortly after the journey began.

The successful expedition did much to stimulated interest among Americans in the newly acquired Louisiana Territory. In addition it strenghtened the claim of the United States to the area drained by the Columbia River. It established good relations with the Indians and the journals maintained by Lewis and Clark provided much needed information on the plant and animal life, topography and climate of the Northwest.

The following is the generally accepted list of members of the expedition as verified by the official payroll at the close of the venture.  See also  Oregon Emigrants Prior to 1838  for additional bios:

Two soldiers, John Newman and M.B. Reed, who had set out with the expedition were punished for misconduct, and sent back to St. Louis on April 7, 1805. Baptiste Lapage was enlisted in Newman's place at Fort Mandan, November 2, 1804, and remained with the expedition until the discharge of its men at St. Louis, November 10, 1806.

Through the generous assistance of Ludd Trozpek, past director of the Lewis and Clark Foundation, it has been brought to my attention that, although there are numerous forms used, the accepted spelling is "Sacagawea". (sa-cog-a-wee-ah)

"Shoshone advocates claim her as Sacajawea, a form of her name which has become the most widely accepted both in spelling and pronunciation, especially in the far west. This leads to complications however, because `Sacajawea' means the equivalent of `boat launcher' or `boat pusher' in Shoshone, which contradicts Lewis and Clark's `Bird Woman'."

"On the other hand, Hidatsa advocates vigorously promote `Sakakawea' which translates literally as `Bird Woman' in Hidatsa and is in popular use among Dakotans."

"There are then four simple forms in which the word may be correctly used: Tsakakawea, Sakakawea, Sakajawea, Sacagawea. The last more nearly approaches the form used by Lewis and Clark and perhaps the preferable one to use....The Bureau of Ethnology, Washington, DC inform me that it is not at all probable that the word is a Shoshone word."

Links to other Lewis and Clark sites:

Lewis and Clark Expedition Journals this site was suggested by Mrs. Ward's classroom in New Hampshire and by teaching assistant Ms. Johnson

My name is Stephenie Flora. Thanks for stopping by. Return to [  Home Page ] All [ Comments and Inquiries ] are welcome.