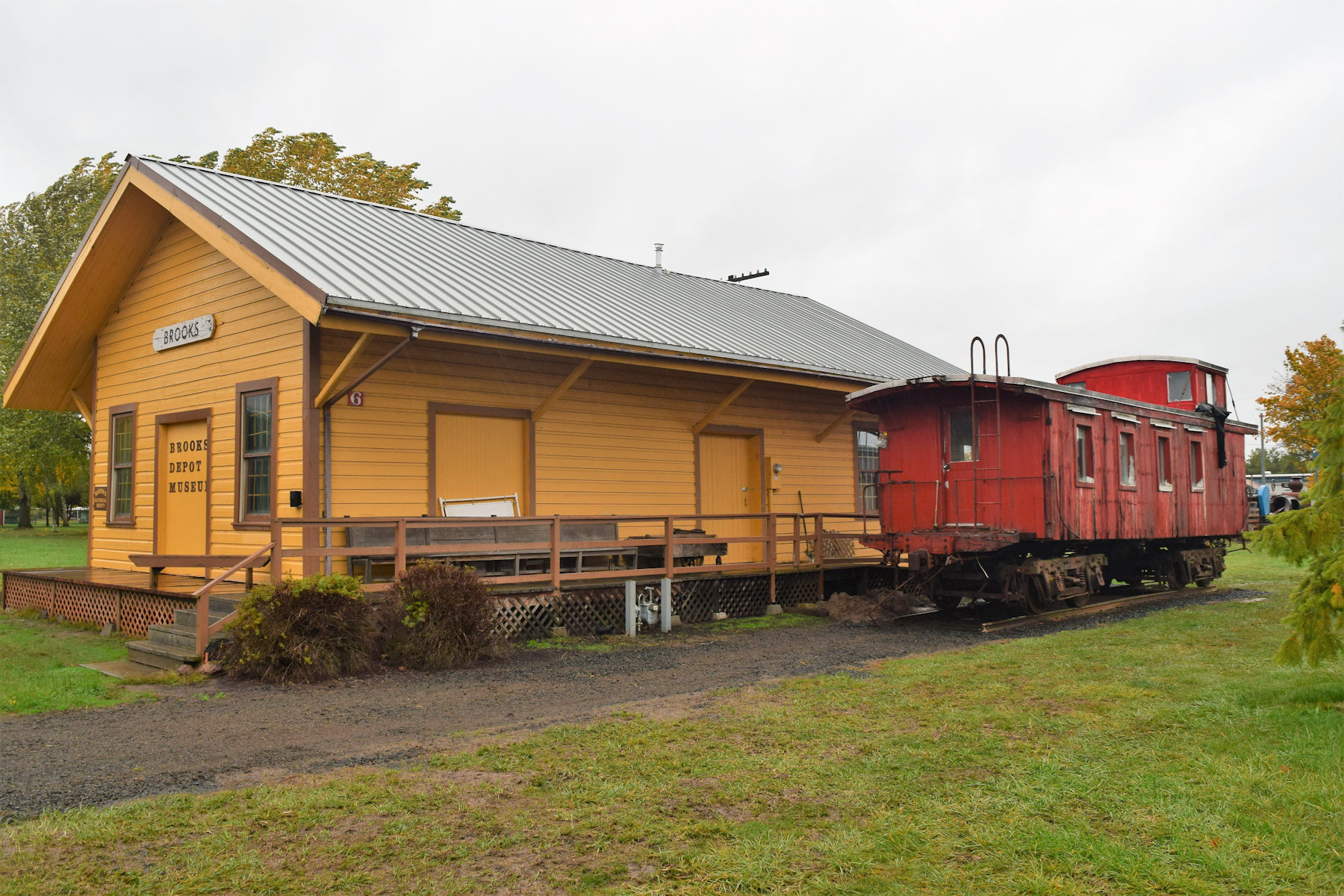 History of the Brooks Historical Society
Brooks Historical Society was founded in March, 1986, after local citizens banded together to help the Brooks School eighth graders with oral histories. They continue gathering local histories and artifacts. The Society immediately became active in the Antique Powerland Steam-Ups, displaying artifacts and historic information. When the depot was offered to the society in 1989, they took on the task of finding it a home.

History of the Brooks Depot Museum

The Oregon & California Railroad built a rail line through the land claim of Linus and Eliza Brooks 1870. The construction included a freight depot, office and a post office. The line later became part of the Southern Pacific Railroad, which built this depot in 1900, just a mile from the current location along the main West Coast railroad line, now the Union Pacific Railroad. The Depot building served the Brooks community from 1900 to 1963 with freight, passenger, telegraph and mail service. The depot was of great importance to the community, especially for shipping agricultural produce and manufactured goods. When use of the depot was discontinued in 1963, it was left vacant.      Around1980 the building was purchased by two Brooks citizens to save it from destruction, but it proved too costly to maintain.  It was moved to Keizer where it was put to various uses until it was finally vacated and left to deteriorate.  The depot had been added as a second story to a garage when it was first moved in November 1984. It was offered to Brooks Historical Society, who arranged to move it to its present location on the Antique Powerland Grounds.  In order to move the building, the garage had to be dismantled, the depot lowered to ground level, and the garage rebuilt with a new roof, all of which was accomplished by volunteers.      On Sunday, August 20, 1989, a moving crew arrived and began the final process.  By the time the depot reached Brooks, the sun was shining and a crowd had gathered to meet it. Fittingly, the moving crew had to halt the progress for a freight train as the depot was ready to cross the railroad tracks in Brooks, which had been its home. When the depot arrived at the Antique Powerland site, it was toasted with apple cider by the jubilant Society members and friends who had followed its journey.      The Oregon Electric Railway Historical Society helped BHS restore the building. Today, Brooks Historical Society uses the museum as its meeting place.      The Brooks Depot Museum is maintained as much as possible as it was when it was a working train depot. The original floors and ceilings and some of the original furnishings add to the ambiance. The freight room is set up with displays of artifacts from days gone by, including farm implements, home furnishings, clothing, toys, and a kitchen scene, as well as a memorial to local men and women who were in the armed forces in World War II. Histories and photos gathered by the Society are available for reference.      In October, 2017, members watched with delight as a red caboose, CBQ waycar (caboose) # 14411, was lifted from trailers by crane and placed on a prepared track to the east of the museum. The caboose is planned to be an office and meeting space for the society. This will free up current office space in the depot, so that the depot can be restored even more nearly to its original condition. For more information, see Current Projects.